Screening of the top 19 works from the four-day
international projection mapping competition!

The world's premier light entertainment in Tokyo for the first time!

TOKYO LIGHTS is a festival of light (hope) that will illuminate Japan and the rest of the world from Tokyo, starting this winter!

Asia's Largest International Projection Mapping Competition,「1minute Projection Mapping」, will be hosted in Tokyo for the first time ever in history! The Projection Mapping artworks of the top creators will be projected at the Meiji Memorial Picture Gallery in the Meiji Jingu Gaien, an important historical and cultural property. Artists from all over the world will compete with each other to create unique works, which will then be judged rigorously by a panel of International Experts and Industry Celebrities who will determine the winner for the most excellent and marvelous work in the world.

The light entertainment and shows will be created by Hiroyoshi Uruma, who served as a Creative Director for the closing ceremony of the TOKYO 2020 Paralympics and is highly regarded both in Japan and worldwide, by composing a fabulous and intriguing light and sound experience.

Experience the extraordinary and hope for the future in a photogenic world of the world's best images and coruscating lights!

From the city of Tokyo to the world. A new project that delivers hope and excitement with the Power of light!

THE FOX, THE FOLKS / Indonesia

THE FOX, THE FOLKS / Indonesia

First launched in 2012. Asia's largest and ninth Annual International Projection Mapping Competition「1minute Projection Mapping」is finally coming to Tokyo! The Tokyo competition received a record breaking 246 entries from record high 54 countries and regions around the world.
A number of magnificent 1minute Projection Mapping Works, selected through a rigorous selection process, will be displayed at once on the screens of the Meiji Memorial Picture Gallery, for the public screening and to determine the most intriguing and award-winning work!
Voting for the Audience Award will also be conducted on the Web.

In addition, for the opening special video, all participants will be given 3D glasses to experience the new projection mapping with a 3D effect.

Main MC for the open judging and award ceremony (December 12)

Debuted in 1992 as a comedian in the comedy group "Bottomless AIR-LINE". Producer of Pikotaro. Kosaka is a CCC ambassador for the Ministry of Education, Culture, Sports, Science and Technology, and a Xenovation Promotion Ambassador for the Ministry of Internal Affairs and Communications. Currently active in a wide range of fields, including variety shows, appearances on information programs as a commentator, and talk sessions on music and entertainment with top runners from around the world. 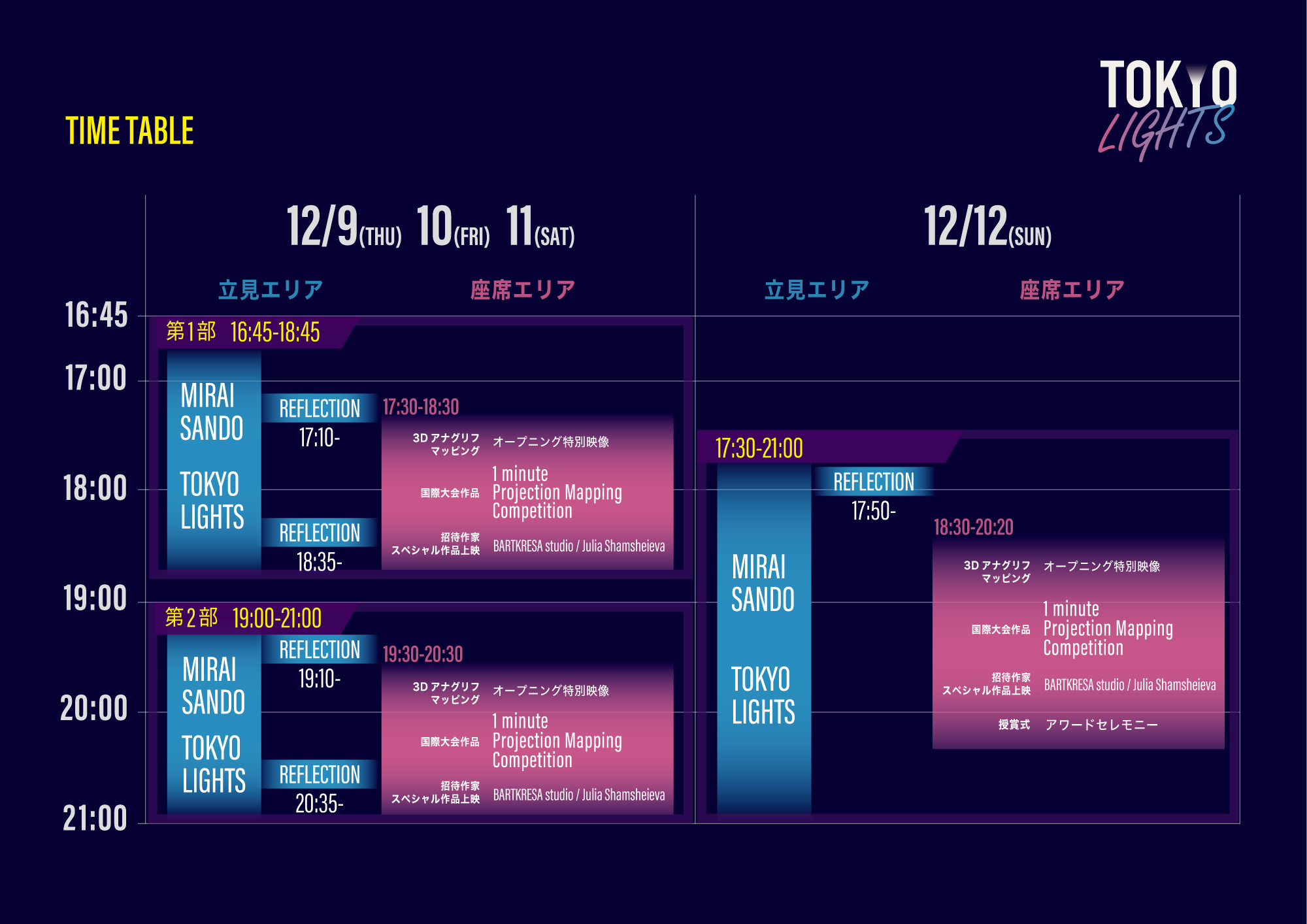 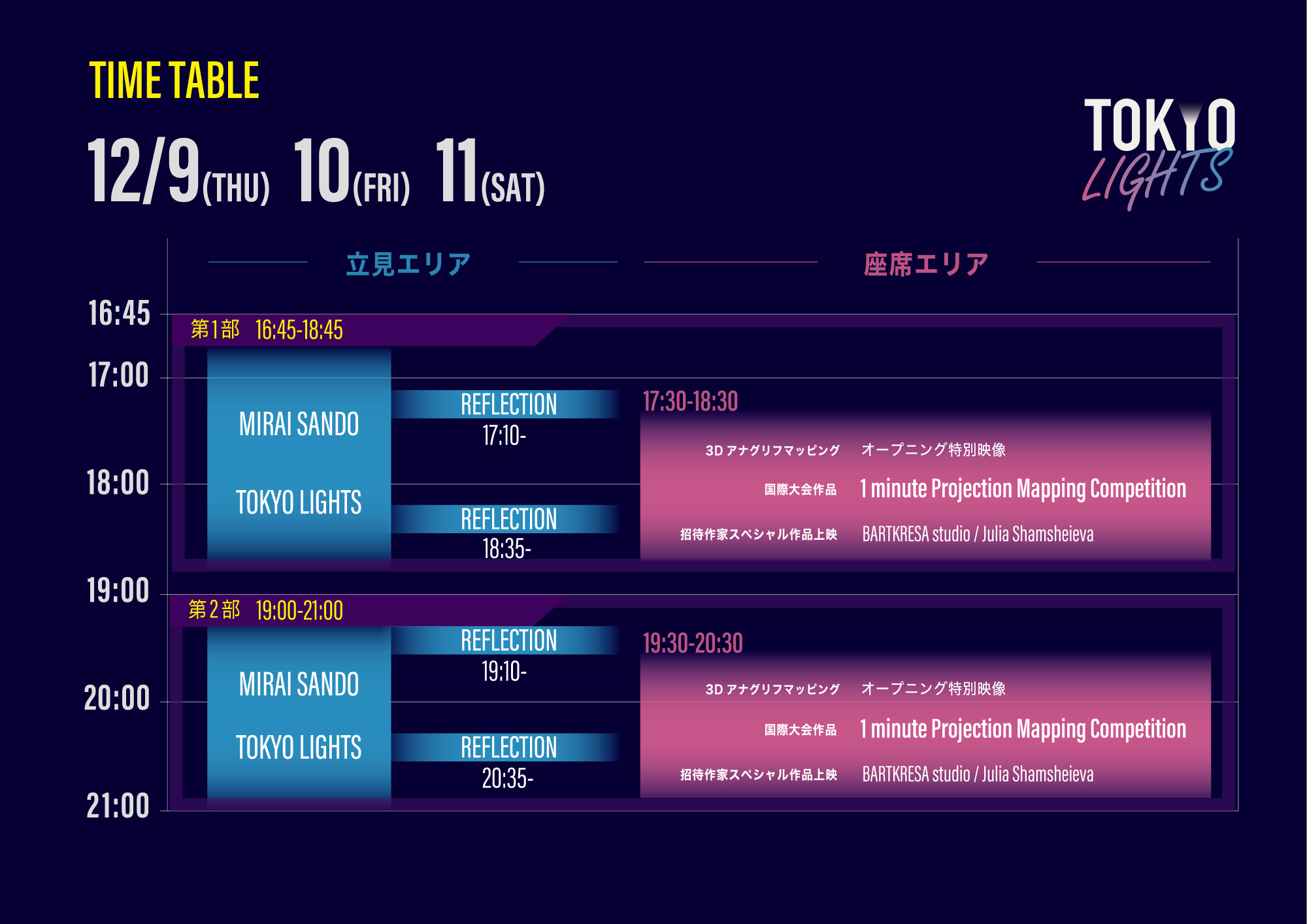 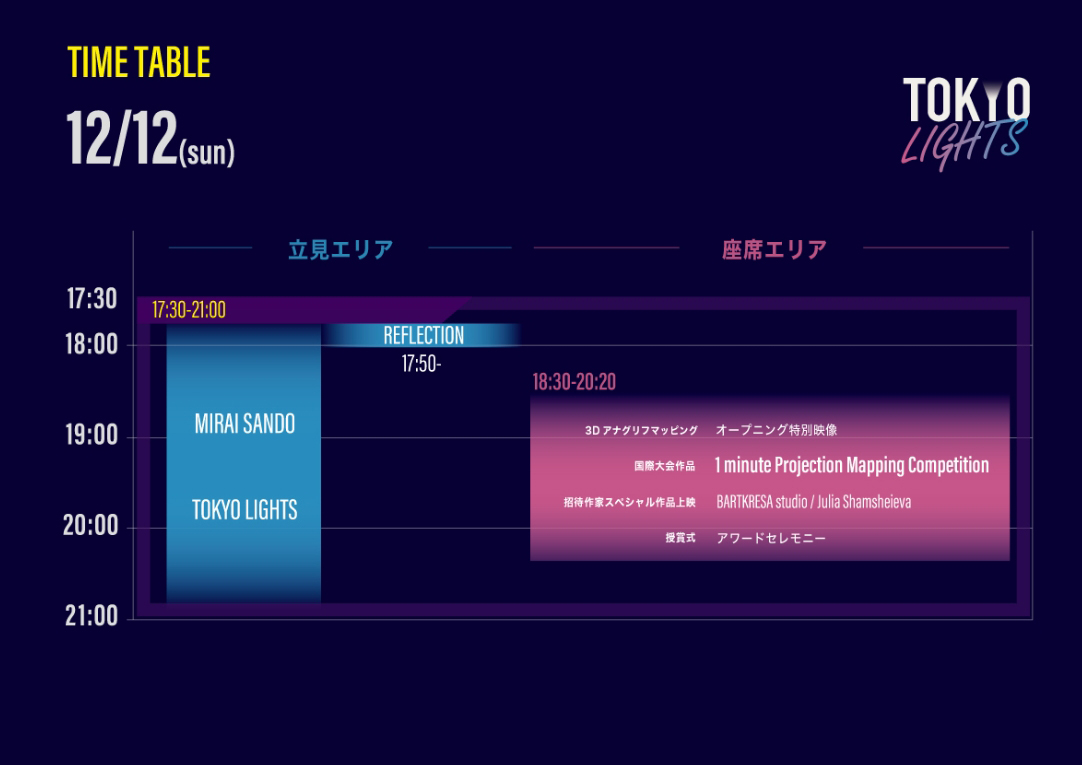 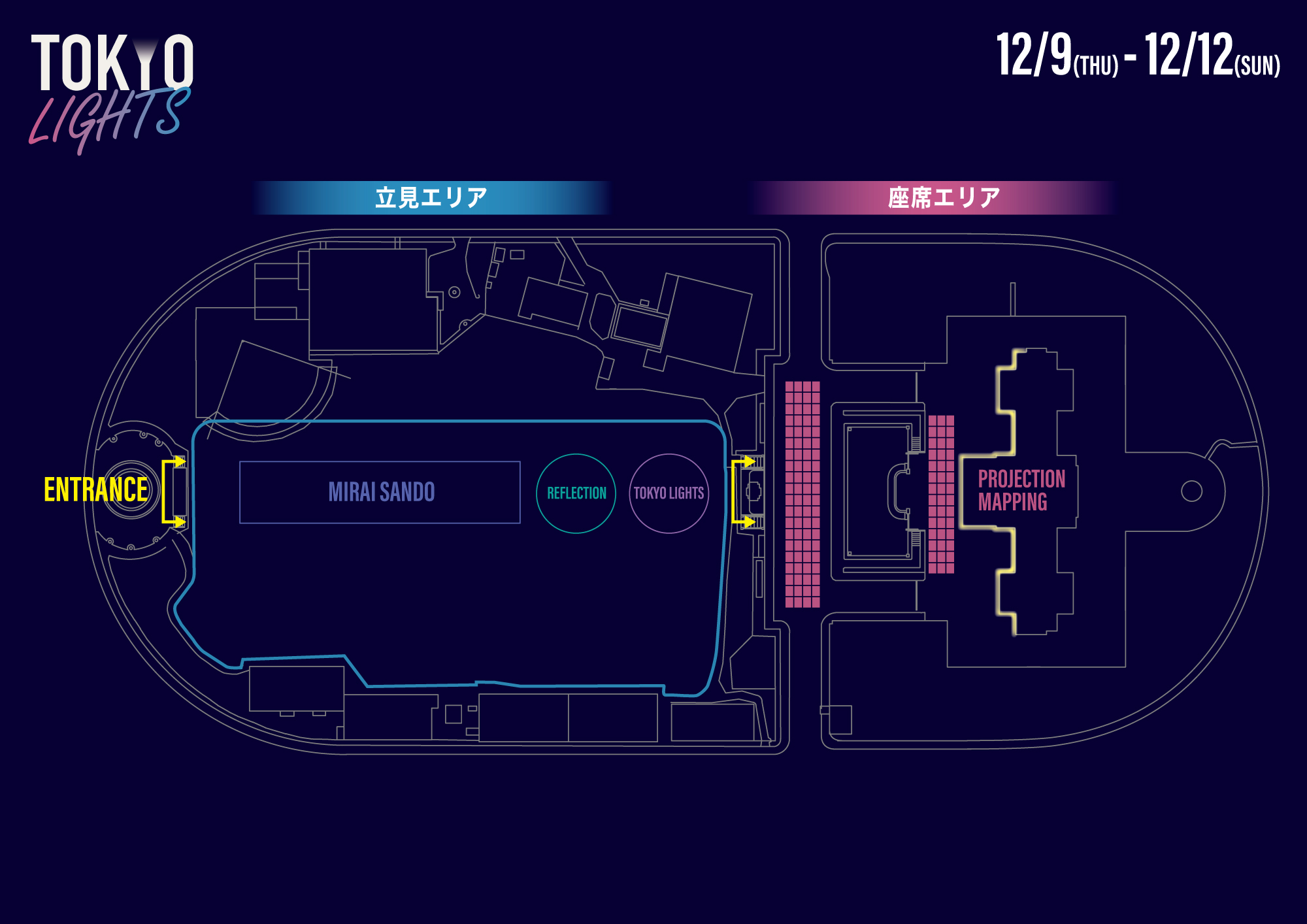 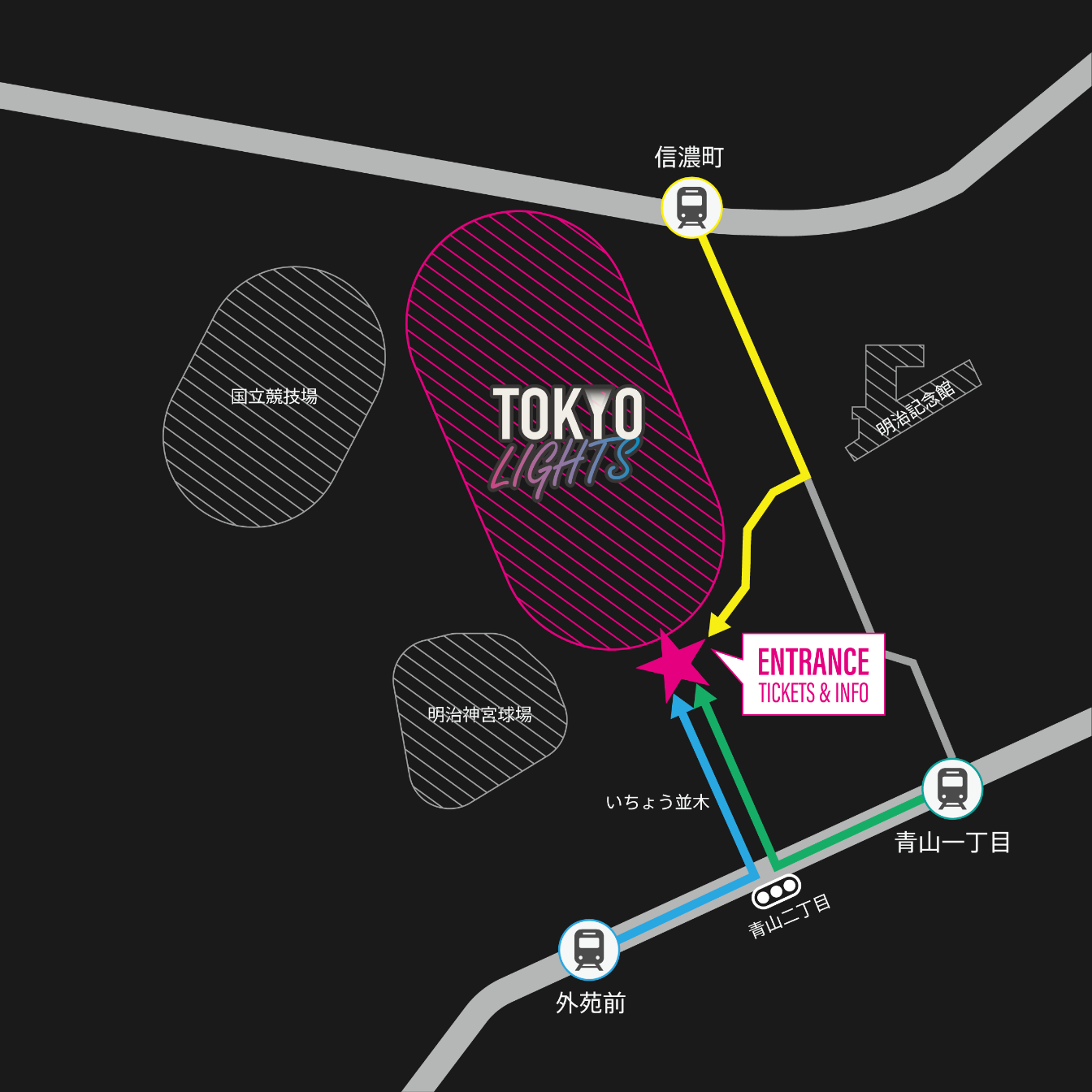 ※Please be sure to check the ticket site for other precautions including before coming to the event.

Notes about the event

※ The link to the digital questionnaire will be sent by Livepocket. Please check the link to the digital questionnaire in the confirmation email sent by Livepocket.
※ In order to prevent infectious diseases, please refrain from eating and drinking in the venue. Please refrain from bringing food and drinks into the venue. Please note that we do not sell food and drinks in the venue.
※ Age limit: 3 years old and above, ticket required. If you wish to watch the "1minute Projection Mapping Competition" seated, children under 3 years old can watch on your lap.
※ Depending on how crowded the venue is, we may have to temporarily limit the number of people who can enter the venue. Please be aware of this in advance.
※ Please note that the name and emergency contact information registered at the time of ticket purchase may be provided to public institutions such as the public health department if necessary, such as in the event of an outbreak of infection among visitors. Please be aware of this in advance.
※ Please be aware that you may be asked to move your seat for the sake of seating management.
※Please use public transportation when coming to the venue. Please do not park illegally and do not cause any inconvenience to the neighbors.
※ Please note that from some seats and areas it may be difficult to see the performance.
※ Congestion is expected for the restroom in the venue. Please be aware of it.
※ Please note that smoking is not allowed in the venue premises.
※ If you are planning to visit the venue in a wheelchair, please book your ticket in advance and contact us as soon as possible. Please note that wheelchair space is limited and you may be asked to sit in a seat. Please note that there is limited space for wheelchairs.
※ Seat-grabbing or saving seat spots is prohibited.
※ The secretariat will not be responsible for any theft, loss, injury, or trouble between customers in the venue. So please take care of your items.
※ The contents and schedule of this event may be changed or canceled without notice due to weather, natural disasters such as earthquakes, and other circumstances. Please note that under such circumstances we do not guarantee the transportation expenses of the customer. Please be aware of it in advance.
※ The event will be filmed and recorded by the media, and will be broadcast live on the 12th, so please be aware that you may be videotaped.
※ When taking pictures at the event, please be careful not to include other people in the pictures, videos, or audio you take and when you publish them on the Internet.
※ When entering the venue, please wear a mask, take your temperature, disinfect your hands, and take other measures to prevent infectious diseases.
※ Pets are not allowed in the venue. (Except for assistance dogs).
※ Please follow the instructions of the staff and attendants in order to ensure safety and the enjoyment of other visitors. Please be advised that you may be asked to leave the venue if you fail to follow the instructions."

About Efforts to prevent the spread of coronavirus

This event will be held in compliance with the guidelines for preventing the spread of coronavirus infection. Therefore, only visitors who agree to the following will be admitted to the venue. Those who do not agree will not be allowed to enter the venue.

・ Please wear a mask at all times in the venue.
・ Please disinfect your hands before entering the venue.
・ Temperature will be measured at the entrance. If you have a fever (37.5℃ or higher), you will not be allowed to enter the venue and admission will be refused.
・ Registration to the coronavirus contact confirmation app "COCOA" is required.
・ Please help us by registering for TOKYO WAKTION.

Participants with any of the following conditions will be strictly prohibited to enter the venue.

・ Has symptoms such as fever (37.5 ° C or higher), sore throat, headache, arthralgia (joint pain), suffocation, difficulty in breathing, cough, diarrhea, conjunctivitis, and dysgeusia (taste disorder)
・ Have a family member or close acquaintance who is suspected of being infected with novel coronavirus
・ Have traveled to a country or region where the government has imposed entry restrictions or required a post-entry observation period within the past two weeks, or if you have had close contact with a resident of such a country 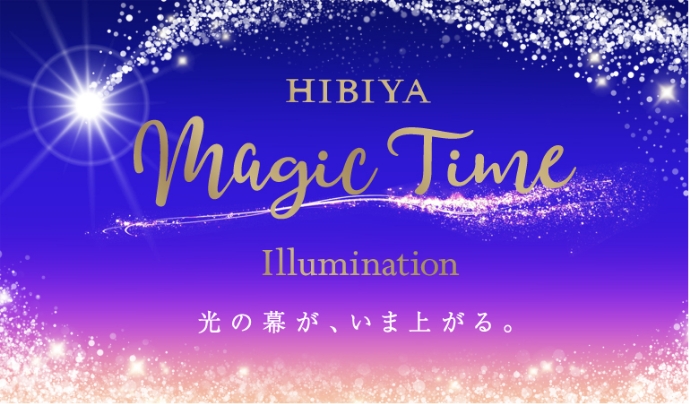